Okay, Cannon Films and Total Gym fanatics, you know what today is: your God’s birthday. So let’s celebrate by looking at one of his early hits: the very mild, but perfectly acceptable head-cruncher, Breaker! Breaker!

Poetry-spouting, sanctimoniously righteous “Judge” Joshua Trimmings (George Murdock), finally has what he’s always wanted: respectability for his tiny little desert town. The state of California has granted him a city charter, so grubby, rundown “Texas City, California” is now officially on the map. However, any trucker worth his salt knows to bypass it. Sadistic hardasses Sergeant Strode (Don Gentry) and Deputy Boles (Ron Cedillos) run roughshod over the truckers and tourists who make the mistake of wandering too close to the city limits…that is, if they weren’t lured there deliberately to be relieved of their hauls, their cabs, and maybe even their lives.

Trucker John “J.D.” Dawes (Chuck Norris), coming back to California in his K-Whopper after working the white line in Alaska, is clued into Texas City’s rep by a fellow trucker’s wife, who drives the family rig now after Strode paralyzed her husband in a fight. So J.D. is clear with his younger brother, Billy (Michael Augenstein): be careful out there on your first solo truck run. Naturally, naive Billy is almost immediately hornswoggled by an anonymous Strode who pretends over the CB to be a helpful trucker guiding Billy away from all those Smoky bear traps…and right into Texas City. When the Judge gives Billy a bum steer on some trumped up charges, Billy bolts and is recaptured by a revenge-seeking Strode. Now it’s up to J.D., along with the help of the Judge’s widowed daughter-in-law Arlene (Terry O’Connor), to bust Texas City wide open to find Billy.

If you wanted to be a hardass like Chuck Norris, you could spend the next couple of days picking apart Breaker! Breaker! in a nasty-minded fashion…but honestly: what would be the point? Most fans and critics of Norris agree it’s one of his weakest big-screen entries, with problems galore in scripting and direction. To be fair, though…it’s also not trying to be The Magnificent Ambersons, either, so why get upset about it? 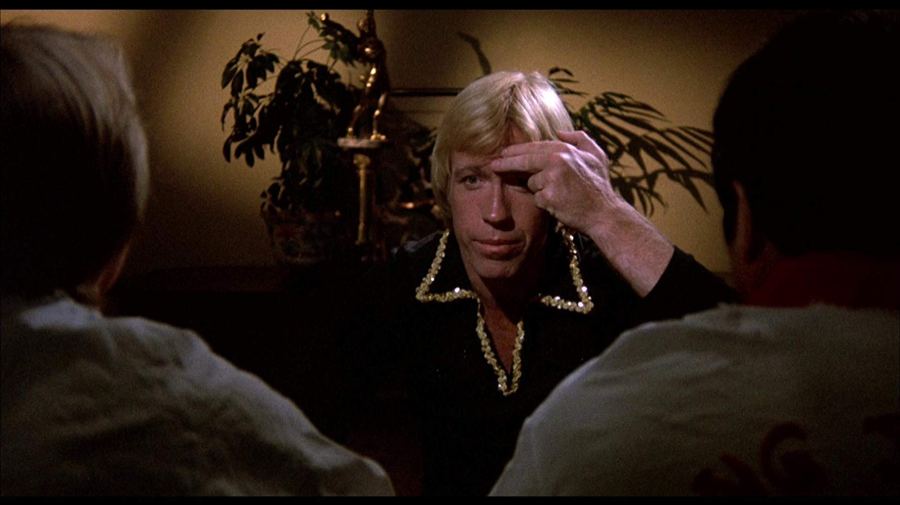 Written by Terry Chambers, and directed by composer Don Hulette (The Madmen of Mandoras, Horror High), Breaker! Breaker! does just what a lot of AIP’s biker movies did back in the late 1960s and early 1970s: take a clichéd, hoary old Western storyline and disguise it for a new audience. Here, that Western story we’ve all seen a hundred times before–a strong, silent cowpoke trying to rescue his innocent, younger kin from an evil, cattle-rustlin’ town, run by a sadistic tyrant—merely swaps out trucks for horses, and CBs for the telegraph lines, before our hero settles the score. 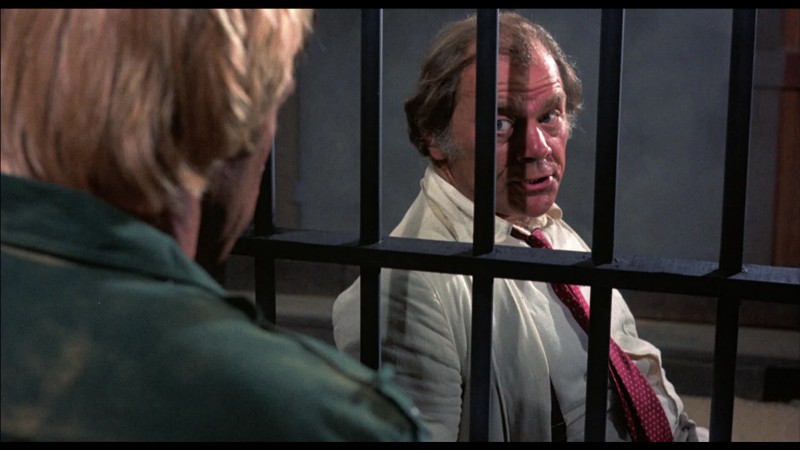 Unfortunately, Breaker! Breaker! differs significantly from many of those B Westerns it copies; while the assembly line production of the old studio oaters made basic, solid storytelling continuity an economic must, Breaker! Breaker! obviously had no such stringent production office oversight. It may not have cost a lot of money to make, but Breaker! Breaker!‘s indie looseness shows. As long as AIP had a timely product to ballyhoo—in this case a high concept melding of the fading martial arts genre and the red-hot CB/trucker fad—I don’t imagine Sam Arkoff or any of the other AIP suits minded too much that Breaker! Breaker! was such a sloppy mess.

A lot of particulars are left hanging here, from little nagging details to big whopping plot holes you could drive a Peterbilt through. Why is Norris’ rig called the “Cindy Jo” (probably because that much better trucker epic, White Line Fever, had its truck, the “Blue Mule,” thusly personified. And remember: Jan-Michael Vincent‘s character was “Carroll Jo” in that…)? Why is the very funny Jack Nance introed as Norris’ sidekick…only to disappear after two brief scenes (wouldn’t it have been better for him to accompany Norris into town, creating the sacrificial “best friend death”)? And what exactly is going on with Murdock’s dead son? We’re set up to think, from the movie’s very first scene, that this shadowy, never-seen figure and his mysterious death will be pivotal to the Judge’s behavior. Regrettably, we never hear anymore about it. 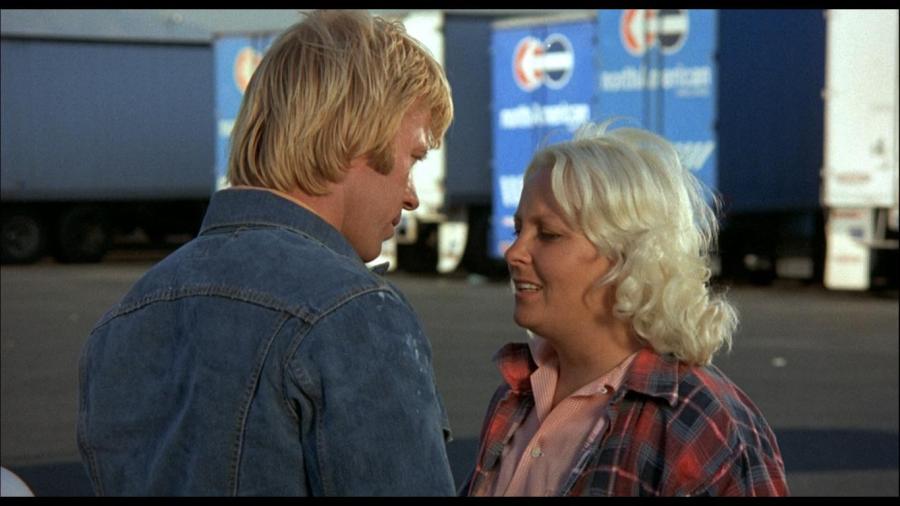 Those are small carps compared to Breaker! Breaker!‘s bigger worries. For us to really fret over Norris entering this supposedly corrupt, potentially deadly town, don’t we have to believe something truly evil is going on there? And yet, we never get a sense there is a physical town to begin with. All we see are some flimsy sets that look like leftovers from some dusty roadside Western town mock-up, with one or two unidentified people lounging around, trying real hard not to lean on the buildings’ walls and thus knocking them over. And what exactly are those four or five people doing in that town? They’re hijacking rigs and cars to strip them for scrap? Okay…so what happens to all the truckers? They’re sent off on their way? They’re killed? What, exactly, were they going to do with Billy, once they recaptured him? Nobody goes to the smokies to complain? And even crazier: wouldn’t this whole scam be revealed within the first week or so by all those truckers supposedly listening in on their CBs? It’s implied that everyone already knows about Texas City’s problems…so who keeps getting stopped there? 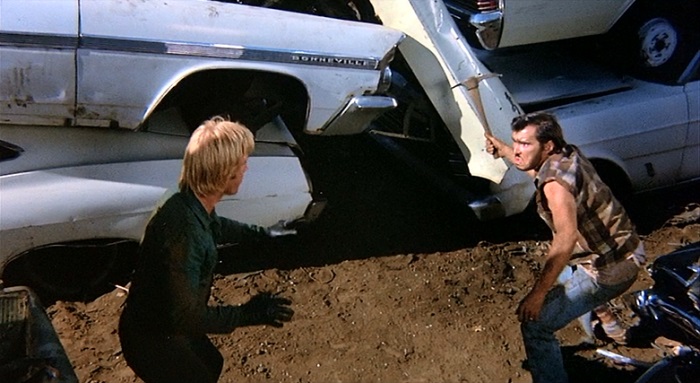 The plethora of G-rated fight scenes that dominate the second half of Breaker! Breaker! try hard to distract us from these mile-wide plot potholes; it’s just too bad director Hulette couldn’t have staged them a bit better. When Norris gets his first chance to really let loose, in that silly arm-wrestling aside at the local choke-and-puke, Hulette keeps the camera tight on Norris’ upper body, denying us a necessary full shot of the martial arts champion in action (we can’t even tell if they are indeed Norris’ legs that are doing the work of kicking The Great John L’s ass). Still…at least Breaker! Breaker! keeps moving, if at best incoherently, as Norris spins and kicks his way through various townie antagonists.

We get some sweet, sweet conversion van action as Norris powers that American eagle-adorned ’74 Ford 4×4 up some steep dusty hills, before the movie’s enjoyably foolish, pretentious-as-hell finale, SPOILER ALERT where Norris and Cedillos apparently enter a Peckinpah dimensional field—everything goes into slo-mo—as Norris proceeds to kick him to death while we cross cut with a sweaty black stallion (of course you’re allowed to get horny over that). Why we don’t get the payoff we’re really seeking—the Judge getting his at Norris’ hands—is yet one more Breaker! Breaker! goof we shake our heads at (the Judge might have gotten squished by an anonymous truck…but the editing is so incompetent, by future big deal Steven Zaillian, no less, that we can’t really tell). 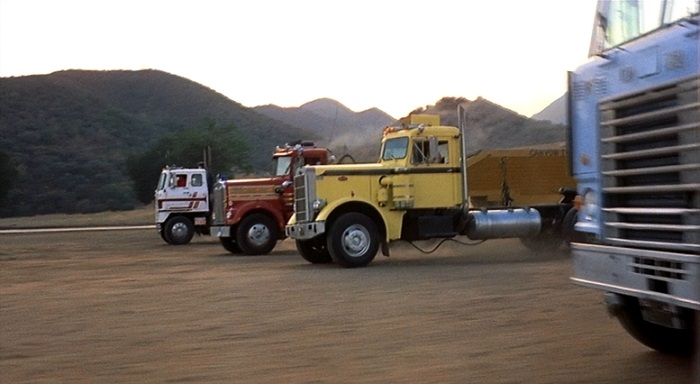 However, we at least have Murdock’s hilariously off-kilter performance here—Breaker! Breaker!‘s best element—showing the accomplished actor hamming it up something fierce, to delightful effect. When we see him flirting with that wacky waitress with the aid of a hand puppet, all I could think of was why couldn’t the rest of the movie be this wonderfully bizarre. Breaker! Breaker!‘s other stand-out turn comes from Deborah Shore, who only has a few lines as a disgusted, weary truck stop waitress—she’s the most real and funny thing in the whole movie.

As for Chuck Norris in his first starring role…he’s perfectly fine, actually, considering his experience level at the time. Quiet and calm, with his strawberry blonde locks, no beard, and denim-on-denim sartorial faux-pas, he meets the minimum standard requirements of a “strong, silent type” action hero quite nicely. He’s even better when interacting with pretty O’Connor (their “Jovan by Prince Matchabelli” romantic interlude is perfect TV commercial-inspired 1970s montage drivel). However, nobody came (or would come, unfortunately) to a Chuck Norris movie to see him act; only fists and feets a’flyin’ were asked of him, which he provides well enough in Breaker! Breaker!