Click to purchase this Hammer Films Double Feature from Amazon.

Originally released in the U.K. in 1965 as Fanatic, the more insanely-monikered Die! Die! My Darling! (three exclamation points!!!), scripted by legendary Richard Matheson, directed by Silvio Narizzano, and starring the divine Tallulah Bankhead, the gorgeous Stefanie Powers, Maurice Kaufman, Peter Vaughan, Yootha Joyce, and Donald Sutherland (in what is surely one of his worst performances), is a satisfying–if now low-key–shocker, so fans of the stars and of the 60s U.K. horror and grande dame Grande Guignol subgenres will snap up this smashing-looking new Blu-ray.

See? This is what good manners get you. American honey Patricia Carroll (lovely, confident Stefanie Powers) has crossed the Pond to marry her new beau, U.K. television producer Alan Glentower (Maurice Kaufman). However, Patricia’s strong sense of proper etiquette (as well as her desire to bring closure to an unhappy memory) demands she make a first time/last time courtesy call on Mrs. Trefoile (Tallulah Bankhead), the mother of her deceased “fiancé,” Stephen, who died in an automobile accident a few years before. Somehow-jealous Alan as much as orders Patricia not to go, a weak command she defiantly ignores, and motors out into the country to Mrs. Trefoile’s secluded Gothic mansion. 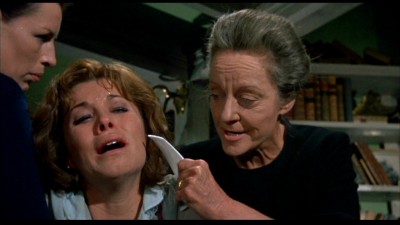 Once there, Patricia is perplexed by Mrs. Trefoile’s keen interest in Patricia’s spiritual well-being…as well as increasingly worried by the rather severe nature of the Trefoile household: all-day Bible-reading sessions and God-fearing unflavored oatmeal for breakfast, lunch, and dinner. When Patricia finally feels she’s paid her debt to Stephen’s memory, readying herself to leave Mrs. Trefoile forever, she’s shocked to find she’s a prisoner at the home, her departure barred by Mrs. Trefoile’s strong-armed servants, Harry and Anna (Peter Vaughan and Yootha Joyce), and by Mrs. Trefoile herself…who wields a .45 caliber automatic with divinely-inspired accuracy. 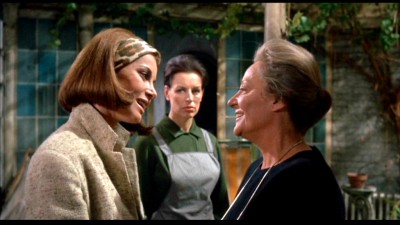 A fairly ubiquitous Hammer chiller that popped up all the time on television when I was growing up (that title was always a grabber in the newspaper listings), Die! Die! My Darling! indeed works best today as a nostalgic exercise in low-key 60s Brit horror/suspense appreciation, buoyed immeasurably by Tallulah Bankhead’s bravura performance (Bankhead, once one of the great beauties of the American stage and screen, shows no self-consciousness at how unpleasantly she’s made up and photographed here). Anyone expecting the kind of juiced, adenoidal splatter thrills of today’s gore-fests will probably snooze, but Die! Die! My Darling!‘s attractive production design (you can tell right away it’s a Hammer), its solid performances, and its steady, careful build-up of suspense, should please fans of this genre and time period. 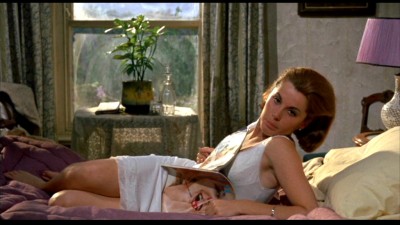 One of a series of subsequently dubbed “mini-Hitchcocks,” where Hammer, diversifying into straight suspense outings in the hopes of building on the international drawing power of their iconic Gothic horror films (while hopefully shoring up their beginning-to-slow-down brand), Die! Die! My Darling! has better-than-average talent behind the camera, including soon-to-be-legendary scriptwriter Richard Matheson (The Incredible Shrinking Man, The Pit and the Pendulum, Burn, Witch, Burn!, The Last Man on Earth, and TV’s The Night Stalker, Duel, Trilogy of Terror), and Silvio Narizzano, a Canadian director working in the U.K. who, right after Die! Die! My Darling!, would achieve international acclaim for the bright, sad classic, Georgy Girl, with Lynn Redgrave and James Mason. As for the people in front of the lens, Die! Die! My Darling! would be up-and-comer Stefanie Powers’ first lead role (after supporting stints in films like Blake Edwards’ Experiment in Terror or John Wayne’s McLintock!), and notorious Broadway star Tallulah Bankhead’s last on-screen motion picture effort, returning after being off the big screen for twelve years (most of the small supporting cast is excellent here, too, with Peter Vaughan and Yootha Joyce a memorably creepy couple…while Donald Sutherland is laughably inept as the drooling “village idiot” Joseph).

It’s fortunate that this talented crew was at work on Die! Die! My Darling!, because otherwise, it would have been even more of a stretch. Certainly the movie’s biggest weakness (at least as seen in today’s context), is the arbitrary, faintly ridiculous nature of the story’s initial set-up. It’s difficult in today’s world of non-existent social “niceties” (you know…where people can’t be bothered to ever look up from their phones) to buy that Powers’ character would feel it “proper” and necessary to pay a courtesy call on the mother of her long-dead fiancé…particularly when Die! Die! My Darling! tries so hard to avoid telling us why Powers never married the ghostly Stephen in the first place. 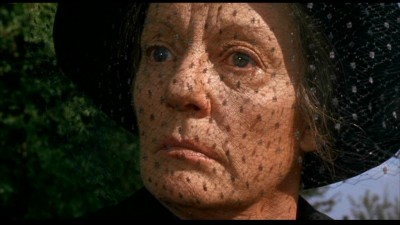 There’s a backstory somewhere behind Powers’ fatalistic assertion to Bankhead that she was never really going to marry her son. Perhaps not coincidentally, particularly towards the end when Bankhead is shown worshiping at the shrine of her deceased son, this story element seems reminiscent of Tennessee Williams’ Suddenly, Last Summer (which for my money really started the whole “big star Grande Guignol” cycle of gothic horror films, not Robert Aldrich’s What Ever Happened to Baby Jane?, as is often cited). Was Stephen gay? Perhaps. Regardless, to get to the main action of the story―Powers locked up in the mansion by kook Bankhead―we have to believe this smart, independent woman would first feel it necessary to not only pay a visit to a total stranger (for “closure”), but to also stay there longer than five minutes, out of “good form,” after the inhabitants’ creepy vibe was so obviously demonstrated…all of which is predicated on a past relationship that we don’t really understand, anyway. 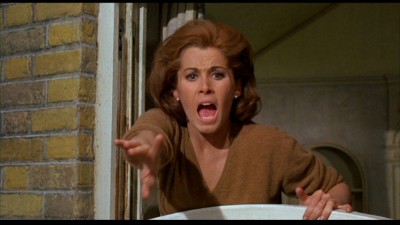 Luckily, one can quickly dismiss these nagging plot holes once the suspense is slowly but surely ratcheted up. Director Narizzano wisely begins the movie with a heavy comedic undertone, lulling the viewer into falsely thinking this thriller will be equal doses of chills and laughs. The opening cat-and-mouse credits play like a live-action Tom and Jerry cartoon, while composer Wilfred Josephs’s deliberately broad, childish music perfectly accents Powers’ equally unsubtle (but funny) double-takes and Bankhead’s garbled, booming line deliveries. As Bankhead begins to reveal the depth of her psychosis, Powers mistakenly snickers (as do we) at the old woman’s outsized, ludicrously pious beliefs; when she states that not only was Powers “married” to Stephen by right of their engagement alone, but that she was lucky to be “widowed” a virgin, we crack up in disbelief…until it sinks in, via Bankhead’s ravaged, furious face, that she really means it. And that’s when the suspense truly begins. 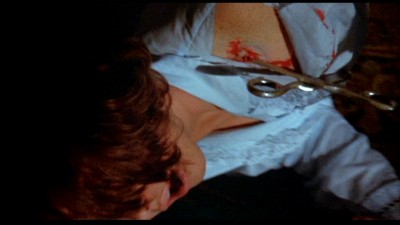 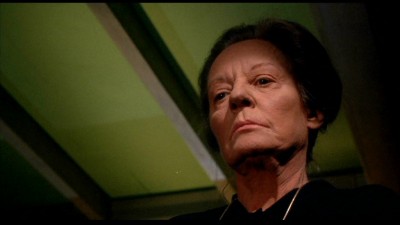 As for Bankhead’s motivation to “save” Powers, first by prayer and then by murdering her, too many critics have seized on the character’s religious mania as the be-all, end-all of the character’s raison d’etre (aided, no doubt, by the original U.K. title of the movie). Bankhead’s creation is the kind of movie character that liberal critics love to point to as an easy example of a Christian zealot–they’re always real careful not to bitch about any other kind–who impose their will on others, even to point of force―a notion particularly amusing in today’s world, when you consider it ain’t religious conservatives telling you if you can defend yourself or not, what kind of cake you have to bake, what kind of joke you can tell, what skin color or gender is more “worthy,” or what words or thoughts one is “allowed” to use in public…or private. 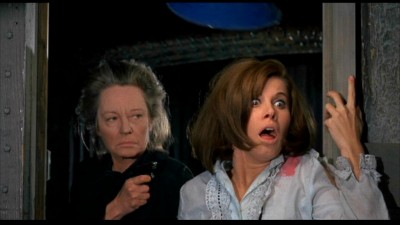 Of course it’s a specious argument at best, anyway, considering Bankhead’s character isn’t a “true” Christian in practice at all (lefty critics always miss this point), but a mentally disturbed individual using the trappings of Christianity for the purposes of control (the Old Testament severity of her physical and psychological intimidation to keep her frightened servants in line), and to try and salve her damaged soul, if you will (and this from a non-believing reviewer). False piety is the blanket used to smother Bankhead’s own raging passions; once in Stephen’s room, she reverts to her old music hall days, punishing/pleasuring herself by dressing in red, putting on lipstick, and drinking whiskey. She wants to kill in Powers what she fears (and likes) in herself. In the end, Die! Die! My Darling! has nothing to do with religion, and everything to do with fairly standard “trapped victim thwarting her insane captor” suspense conventions―conventions it honors quite well, and to increasingly pleasing effect. 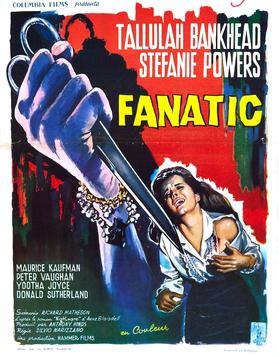