What if one day you woke up and found yourself with no friends, no acquaintances, and no identity? And anyone you tried to talk to had no idea who you were, and didn’t believe you when you tried to tell them? This kind of identity theft sounds like a problem we face today in our hyper-public online lives—lives lived through various Internet channels, and most prominently on social media. But what was it like in the early days of the World Wide Web? What were the fears of living in an online world in the mid-90s? Columbia Pictures’ The Net, scary in 1995, still teaches a dandy lesson today. Only the size of the screens, the disk storage, and the hairstyles have changed.

Starring Sandra Bullock, Jeremy Northam and Dennis Miller, director Irwin Winkler weaves a tale not uncommon in the films of the 1990s, where the suspense thriller loomed large…where more personal stories with protagonists doing battle with mysterious shadow agencies reigned supreme before the more global threats of the post-9/11 world took hold the following decade. In other words, before real-life international terrorists scared the crap out of us, the fear of the unknown is what scared us most in the 90s, be it a shadowy corporation intent on puppeteering the economy from behind the scenes, or a murderous femme fatale seeking vengeance after being stilted by her wealthy lover….these are the stories, generally speaking, that pop into mind when I think of the the 90s, and The Net falls solidly into that category.

If you’re looking to add it to your collection, you can find it on Blu-ray through the Sony Pictures Choice Collection as a manufacture-on-demand “burned” disc (I’m pleased with my copy; it looks good and the packaging professional).

Sorta dorky, hermit-like Angela Bennett (Sandra Bullock) has a problem—she’s a computer nerd, and she needs to get out more. But she has an even bigger problem—she’s a hot computer nerd. And that gets her some unwanted attention. But nonetheless, a long-put-off vacation is just what the doctor ordered, and Angela plans to park her scuplted, stellar bikini body on the beaches of Cozumel, an island in the Caribbean sea. But before she goes, Angela, a systems analyst who telecommutes to San Francisco, is to meet up with her co-worker at Gregg Microsystems, Dale (Ray McKinnon), who wants—no, needs—to speak with her about a floppy disk he recently gave her with a computer security program called “Gatekeeper.” Because, you see, there’s a backdoor program in “Gatekeeper” that may allow outside access to the systems of those who use it. Dale has just figured this out and, naturally, when it comes time for him to meet with Angela, he never arrives. 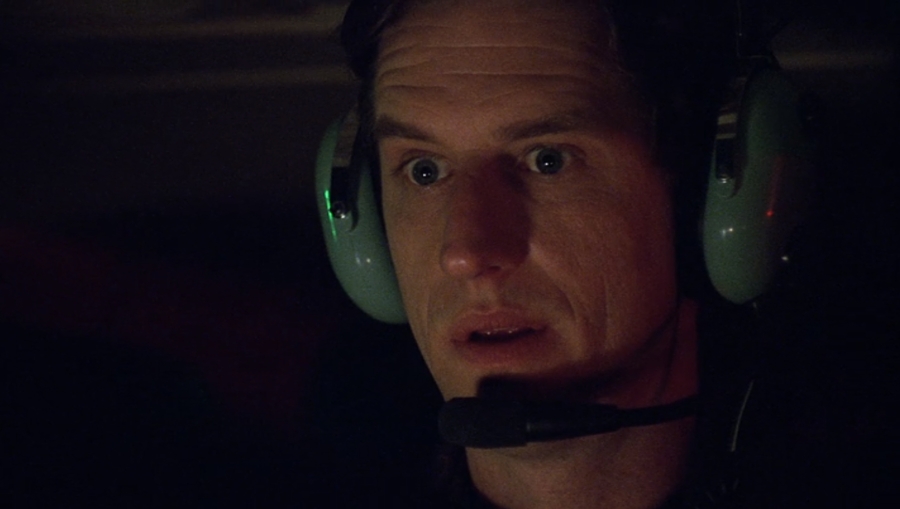 Angela is told Dale has suddenly passed away and that she shouldn’t postpone her vacation plans, so she boards the plane and shoots off to Cozumel where she’s spotted—bikini-clad—by e charming, intriguing, mysterious Jack Devlin (Jeremy Northam) and the twosome begin hanging out. When a two-bit thief accosts them while walking at night on the romantic beach, the thief makes off with Angela’s purse—along with the floppy disk inside that contains the “Gateway” program. Devlin injures himself trying to chase the thief, who ultimately escapes…but is “heroic” Devlin who she thinks he is?

Before you can say “My dial-up’s slow,” Angela finds herself adrift in her own lonely world, slowly finding that her life has been erased. She can’t replace her stolen passport in Cozumel without using a fake name and, when she gets back home, she finds herself on the run, The Fugitive-style, from the police, her new lover, and whoever the hell’s behind the genius plot to erase her from society and frame her for other crimes being perpetrated along the way. With her Alzheimer’s-stricken mother (Diane Baker) in a care facility and unable to recognize her own daughter, Angela turns to the only person she feels she can trust—her ex-boyfriend, psychiatrist Dr. Alan Champion (Dennis Miller). With Alan the only person on the outside who believes Angela is really Angela, can he help her clear her name and solve the mystery behind all this cyber-tomfoolery? And just how is all of this related to the upper levels of American government, and specifically, the death of the Secretary of Defense (Ken Howard)?

My first experience with the Internet was in 1997and, like my first time driving a car, I remember it vividly. One of my best friends—a theater guy—wanted to visit one of his theater friends. When we arrived at his friend’s place, they vegged out in front of the living room TV to play some Sega Genesis. Somehow or another, I asked about the Internet, and I was in luck—his friend was online! So, I camped out in front of this dude’s computer in his bedroom while they played video games into the night. 10 hours later, the sun came up and I was still browsing through GeoCities and Angel Fire-hosted websites, lost in a never-ending world of information overload (and here I am today, still in front of a computer, connected to the Internet).

For this reason, when I saw The Net for the first time in 1995 or ’96 (it would’ve been as a VHS rental; I didn’t see it at the theater), I don’t think I quite understood what was happening with the tech side of the story—I hadn’t yet experienced the ‘net! But the exciting direction, frenetic pace, and high-stakes story still managed to pull me in. Had I popped my Internet cherry prior to seeing The Net that first time, it may have had an even bigger impact. This online sh*t is for real—and it’s scary! 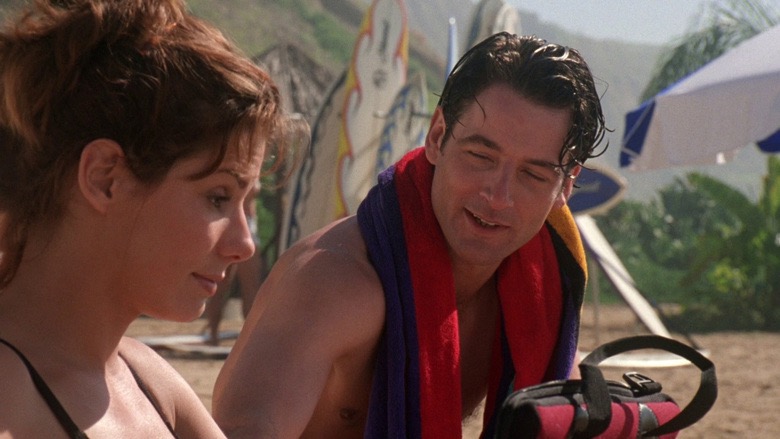 The Net is one of those films that viewers can watch two different ways. In various reviews and comments I’ve read online, people tend to either nostalgically remember it as a fun film they saw in the mid-90s, or…they’re new to the movie and slag it off as a cheesy, “old” film with dated computer technology (if you’re one of these people, don’t look too closely at those old landline phones in 70s movies; you may not be able to stomach it). I fall in the former camp; I saw it in the mid-90s and I remember it fondly. But where I differ is that I think it still holds up today as a warning about just how deep in sh*t you can get into when messing around online. In fact, I posit that things are even more dangerous today, with a large percentage of the world’s population routinely giving up their personal information while being more “connected” than ever, for better and worse.

Sandra Bullock, having recently come off the blockbuster thriller Speed in 1994, had proven herself a hot commodity by 1995, and no longer was she to play second fiddle to Keanu Reeves; she was going to headline her own films as well (she starred in rom-com While You Were Sleeping in early ’95, which directly precedes The Net in her filmography). Here, Bullock strikes a nice balance, coming off simultaneously strong and vulnerable; she’s believable as an unlikely heroine who’s not quite comfortable in the body that she was born with.

Jeremy Northam is also compelling in his turn as the seductive Jack Devlin. As an equally connected technology freak, he’s both smooth and unsure, luring us in with his devilish good looks and British accent while displaying just the right amount of insecurity, making us fall for him as someone we (and Angela) can trust. As Angela’s goofy ex-boyfriend, ex-Saturday Night Live star Dennis Miller turns in a nice, measured performance as the low-key, goofy Dr. Alan Champion. His skepticism of Angela’s story makes for some nice light comedy, giving us an occasional break from the tightening tension ratcheting up around us. Miller sort of comes off as if playing a cuddly, likeable version of his real-life self. It’s nothing spectacular, but it’s a welcome change of pace here.

Director Irwin Winkler, prolific as a producer of high-profile films (Rocky, Raging Bull, Casino, Busting), didn’t direct many films in his career but proves a steady hand at pacing a thriller, keeping the mystery ratcheted up and the viewer on edge. But there are indeed some silly interludes. Watching it with fresh eyes today, I can’t help but think there had to be someone Angela could turn to that was able to verify she was indeed who she said she was, even if it’s just the guy who delivers her pizza. But scripters John Brancato and Michael Ferris don’t sweat the small stuff; they want us to believe that nobody—NOBODY—is able to help her…that as far as the entire world is concerned, Angela Bennett is no longer Angela Bennett, and she’s not to be believed by anyone. That vibe is successfully conveyed, even if the film displays those obvious “reality” oversights at times during its 114 minutes. It’s the thrill of the chase we want to see, and that’s what the filmmakers deliver here.

According to reports, audiences polled by CinemaScore gave the film a ‘B’, a relatively low score for that scale, and critics were mixed (just 40% of critical reviews logged at Rotten Tomatoes are positive). Perhaps some of this reaction was due to the obtuse (at the time) technical aspect of the subject matter. Like me, general audiences weren’t sure what to make of this “Internet stuff” back in 1995. Is this science fiction? Is this stuff for  real? Sure, there were many people ahead of the curve—the “early adopters”—but the population-at-large was not fully aware of the technology and how it worked in ’95 (and make that double for a rural kid in the sticks like me).

In a year when Toy Story ruled at the box office along with Batman Forever, Apollo 13, and Bond’s long-awaited return in GoldenEye all reaching the top 10 that year, The Net finished respectable as the 35th-highest-grossing US film of 1995 (out of 279 theatrically-released films), taking in $50.7 million domestically and $110.6 million overall against an estimated $22 million budget (if online sources are to be believed…ironic to ask considering the movie we’re talking about, right?). It proved popular enough to spawn a TV series of the same name which ran for one season (1998-99) on cable’s USA Network, starring Brooke Langton in the Angela Bennett role; and a direct-to-video sequel in 2006, The Net 2.0, starring Nikki DeLoach and directed by Charles Winkler, Irwin’s son (it was produced by the elder Winkler and Rob Cowan, the producers of this film).

Could The Net 3.0 be something the world is ready for now? The Net showed us what online danger looked like at the Internet’s infancy. It’s a thrilling, creepy look at what can go wrong. Today, it serves as a reminder and a warning to all of us smartphone-and-tablet-carrying web and app users surfing social media and dating apps: things have only gotten scarier. 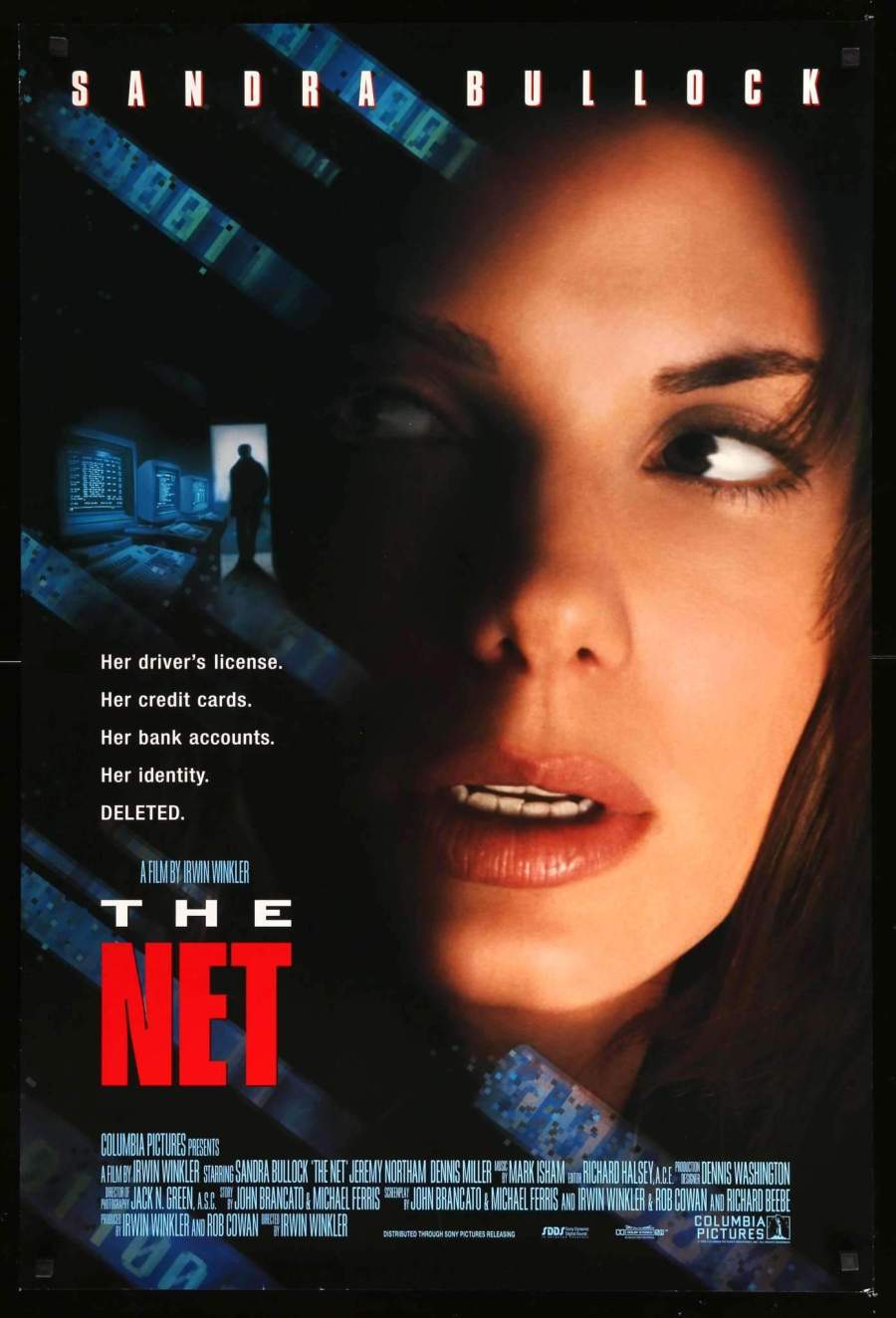