Click to order The Adventures of the Wilderness Family collection at Amazon.

Melodrama and adventure of the simplest (even primitive) kind, the gorgeously photographed The Adventures of the Wilderness Family succeeds expertly at what it sets out to do: provide a straightforward, exciting adventure that families with little children could enjoy together. So what’s wrong with that? Luckily, Lionsgate Releasing has all three Wilderness movies out on DVD now, in sparkling widescreen transfers. 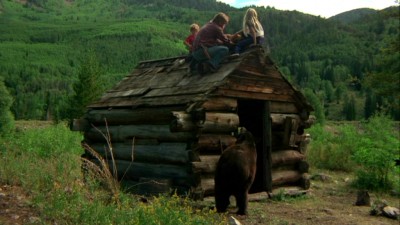 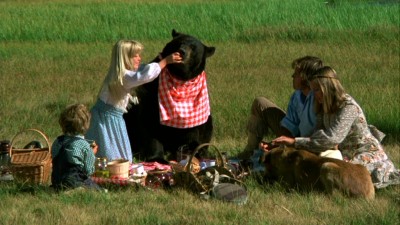 The smog-laden, traffic-congested morass known as Hell-A. Handsome Skip Robertson (Robert Logan) is a construction worker on a high-rise building, but frankly, he’s had enough of the dirty city. His young daughter, Jenny (Hollye Holmes), has trouble with her lungs, which her doctor (John F. Goff) somewhat vaguely attributes to either allergies, or Los Angeles’ air, or water, or perhaps the “stress of living here.” Finally, Skip makes a decision; he convinces his pretty wife, Pat (Susan Damante Shaw), to do what they always talked about doing: sell off everything they own, buy some land in the Rocky Mountain wilderness, pack up the kids and the dog, and leave. Head for the hills. And that’s just what they do. 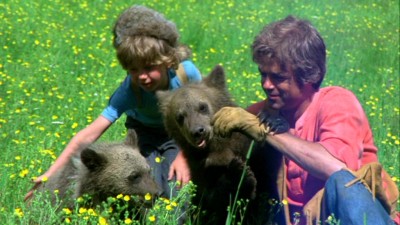 Arriving by bush plane, the family camps in the old, abandoned cabin that belonged to the land’s former owner, and they set ’bout ta livin’. They cut wood, they pick berries, they hunt, and they build their dream cabin. They even adopt a raccoon, a pair of baby bear cubs, a friendly black bear named Samson (tamed by the previous owner), and meet a neighbor: colorful mountain coot Boomer (George “Buck” Flower). But life in the wilderness isn’t all fun and games. Wolves, cougars, and a vicious, hungry grizzly bear named Three Toes, want only one thing from the wilderness family: their flesh. 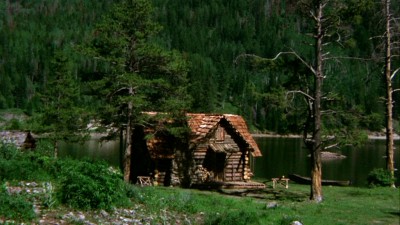 Released right at the peak of all that environmental “back to nature” crap that was flooding the pop culture in the early-to-mid ’70s (we bought a box of bran cereal once…), the miniscule-budgeted The Adventures of the Wilderness Family was a huge hit at the theaters, making over $30 million in the States alone (and those were 1975 dollars, folks) through savvy, circus-barker saturation TV and radio marketing (“Ending Thursday! See the rock slide that almost kills the Wilderness Family! See the grizzly bear attack! You must see The Adventures of the Wilderness Family! Ending Thursday!”). No mistake: there was also a corresponding genuine hunger on the part of parents to take their children to a movie where nothing inappropriate was going to happen―an issue that was beginning to get a lot of ink by 1975. 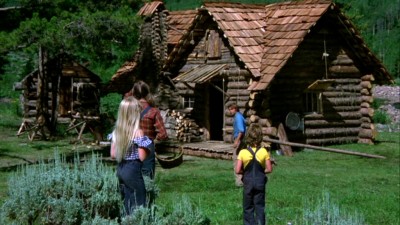 The right kind of movie at the right time, The Adventures of the Wilderness Family hit all the right buttons for nervous parents back in 1975. Sitting in their “Rustic Oak” imitation wood-paneled rumpus rooms, watching The Waltons and Little House on the Prairie inbetween the Euel Gibbons’ ads for Grape Nuts, while they macraméd slings for their Boston fern terrariums (and wondering why their Earth Shoes stunk like corn chips), an ad for The Adventures of the Wilderness Family must have seemed like something heaven-sent for families unsure of what was “safe” at the theaters.

Usually back then, the TV commercials and screaming radio ads ballyhooing those one week-only movie engagements were exploitation “nightmares” like The Texas Chainsaw Massacre, or dicey action numbers like Billy Jack (child abuse=hearing One Tin Soldier even once). But here was a prominently-advertised G-rated movie, complete with laughing children, dewy meadows, playful bears, and snarling cougars, that obviously the whole family could see without Dad covering your eyes at all the good parts. Simply pile the kids in their jammies into your lime green, white vinyl-topped 1974 Pontiac Le Mans, snap the John Denver 8-track cassette in the player, and the whole family can get back to nature at the local drive-in.

The Adventures of the Wilderness Family is an exceedingly unpretentious movie in terms of its themes and execution, and therein lies its strength. The storyline is the essence of simplicity: modern city life is intolerable (it will even make your kids sick), and getting back to nature is the only answer, even with the wilderness’ pitfalls and dangers. That’s it. Not too complicated. 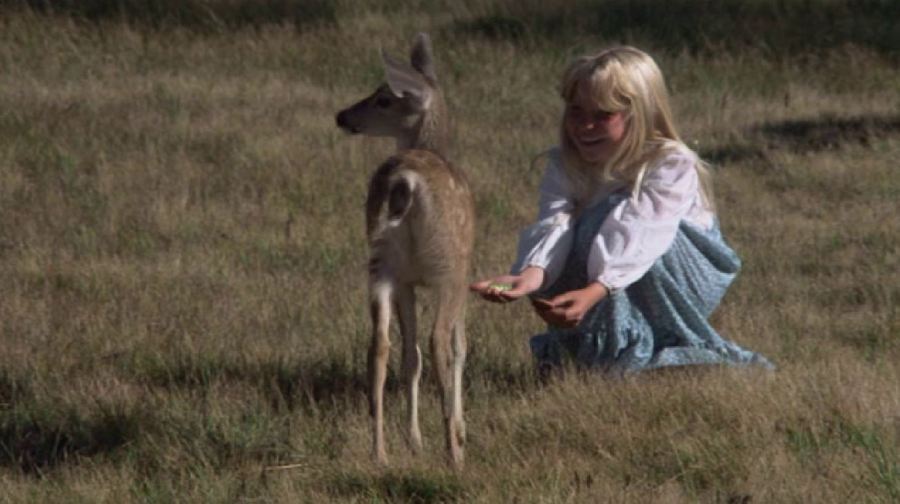 Once the family is in the wilderness, director and co-writer Stewart Raffill’s (’80s genre flicks like High Risk, Mac and Me, The Philadelphia Experiment) scenes pretty much fall into two categories: Mom and Dad hunt and fish and build a cabin, while the kids (often in slow motion) either gambol around picturesque meadows and hilltops with cute little critters…or run screaming in terror as a wolf or a cougar or a bear tries to eat them, right before the family dog or Mom and Dad rescue them. There’s no exploration of the kids’ adjustment to the wilderness here―they’re either laughing or yelling in horror. There’s no nuanced delineation of the parents’ relationship―she worries; he reassures her (they pray over the food they’ve provided for themselves, and he tells her she’s beautiful―a nice, real moment in the movie); then he worries; she perseveres; and they both decide to stay. 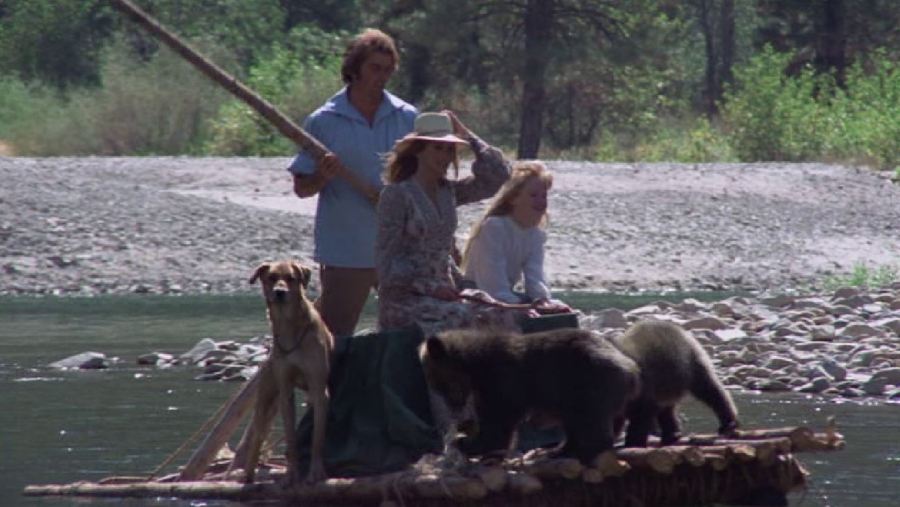 The uglier realities of living off the land are never shown. When Dad kills a moose, he tells his sad son, “We did what we had to do,”…but you don’t see the actual kill shot, or the blood, or the skinning and the butchering which would follow, all of which, believe me, ain’t pretty (oh yeah? You ever render a moose? Thought not…). Nor are the real dangers illustrated (if you want to know what really happens when you try to befriend a wild bear, go ask Timothy Treadwell). 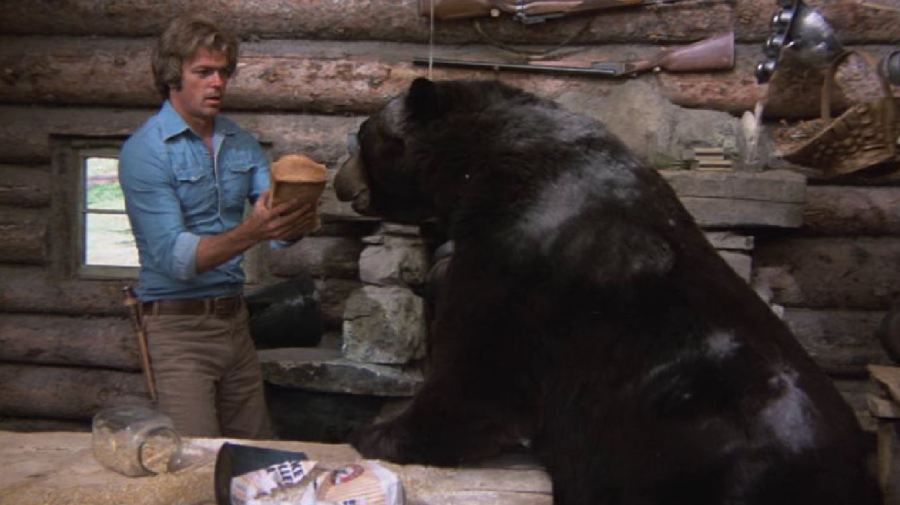 This isn’t realistic storytelling by any stretch of the imagination, but it is storytelling in the form of plain, old-fashioned melodrama. The family tries to find happiness in the wilderness, as they are constantly besieged by ferocious animals. You can’t get any more attractively primitive than that. When you have a finale where the father is shooting the rapids in a rickety canoe, trying to reach a doctor while not only his daughter lies dying from a viral infection, but a huge grizzly is trying to eat the entire family, you don’t have Shaw (thank god): you have Lillian Gish on that ice flow. 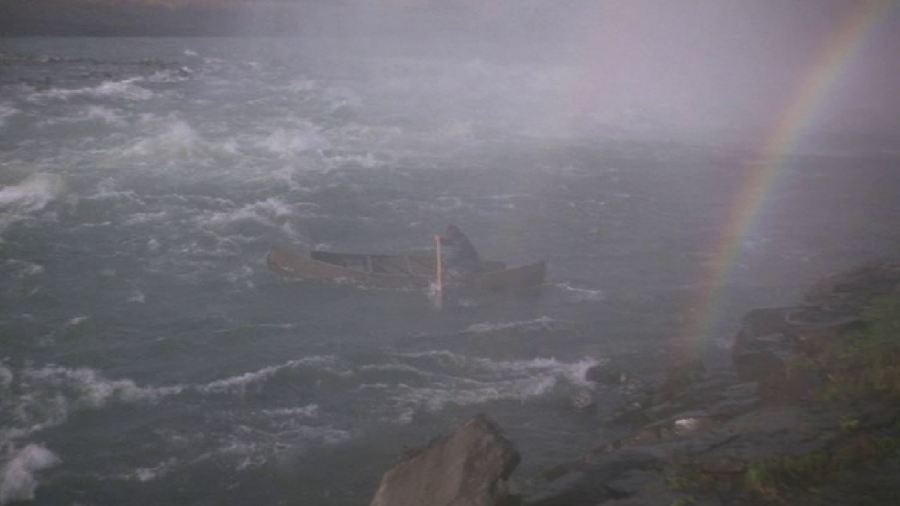 And since The Adventures of the Wilderness Family treats this form of old-fashioned narrative melodrama with straight-faced respect, it succeeds. Viewers who make fun of a movie like The Adventures of the Wilderness Family, ticking off all the factual mistakes that pile up and counting off all the different ways this “wilderness” family would be toast if this were real, miss entirely the point of this kind of movie. The moviemakers here know this is fantasy―that’s the point. The advertising come-on that this was based on a true story is just that: marketing.

The moviemakers know they’re creating essentially a moving storybook for kids and families; they know hacking out a life in the wilderness wouldn’t be this pretty, or this clean, or this safe. Apparently, producer Arthur R. Dubs, the founder of Pacific International Enterprises, which specialized in family movies like Challenge to Be Free, Across the Great Divide, The Late, Great Planet Earth, and Windwalker, was an outdoorsman himself―he undoubtedly knew what the score was when you’re really out in the bush, trying to survive. The Adventures of the Wilderness Family isn’t a survivalist documentary; it’s an exciting bedtime story for kids, with pretty pictures and pretty people and cute/scary animals. And as such, it’s nicely crafted, and entirely valid.