Take that, Mrs. June Cleaver! A cold, calculated bit of domestic hysteria, with Joan Crawford turning in one of her best performances as a calculating ball-buster who will stoop to anything to keep a tight lid on her husband and home. 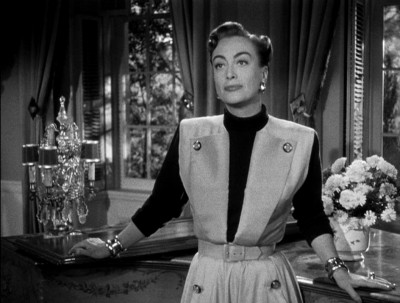 When Walter does show up, he grovels for Harriet’s forgiveness (which he doesn’t get) and listens as Harriet lays down the law to the servants: Mr. Craig is not to go out to eat while she’s gone for two weeks, and the house is to remain, as always, immaculate. Harriet’s mother, a virtual catatonic, isn’t interested in Harriet’s gift of an expensive brooch, nor is she expected to recover anytime soon, according to Dr. Lambert (Katherine Warren), since Harriet’s mother has retreated to an “inner world” that may take years to understand.

Harriet, threatened by the doctor’s questions about her own marriage, isn’t buying into any complicated, vague diagnosis: her good-for-nothing father is the cause of her mother’s illness, end of story, having skipped out on the starving family when Harriet was only 14-years-old. When Harriet can’t reach anyone at the house, she cuts her trip short and discovers to her horror that her beautiful, flawless home has been trashed (with “trashed” translating to a couple of full ashtrays and some glasses and newspapers on the tables) during a party Walter threw for his old friends, with the servants given the weekend off. 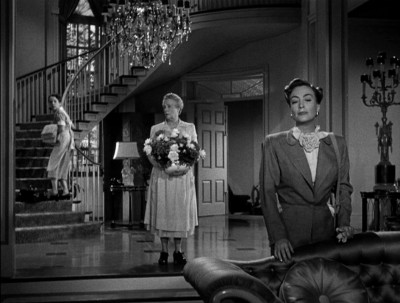 This monstrous display of rebellion against her iron-clad rules detailing exactly how the house should be kept and how her husband should behave at all times, sets into motion a series of increasingly tense confrontations between Harriet and everyone else in the house, as she stoops to ever-more cruel manipulations and lies in a desperately sick effort to maintain control over everyone and everything in her life. 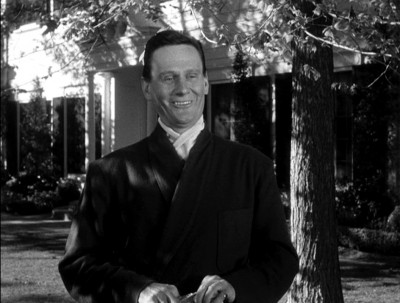 In Vincent Sherman’s ripe autobiography, Studio Affairs (I highly recommend it for all the fun dirt it dishes), the director made a point of linking his then-lover Joan Crawford’s off-screen personality and behavior with the fictional “Harriet Craig.”

Indeed, since Crawford’s legacy is now (fairly or unfairly) inextricably tied-in with the literary and subsequent cinematic portrait drawn from her adopted daughter Christina’s excoriating tell-all, Mommie Dearest, it’s difficult not to watch Harriet Craig and look upon the character’s actions as almost a backwards incarnation of our own perceptions today of who and what Joan Crawford was off-screen—a weird, self-reflexive exercise that only makes Harriet Craig all that much more enjoyable. 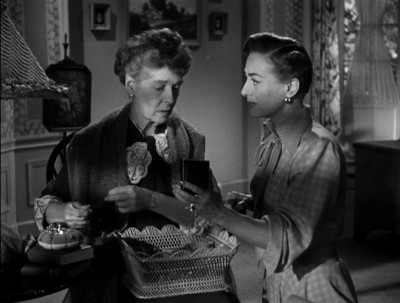 It’s impossible not to see Crawford here, butched-up with her slicked-back hair, mannish tailored suits, and kabuki-like beautiful/hard-as-nails face—snapping over her Ming vase being off-center one inch on the mantelpiece—and not immediately call up images of Faye Dunaway yowling and clawing at the turf. You can watch Harriet Craig on that camp level (hate that term…) alone, and certainly enjoy it well enough; however, it plays even better if you can try and temporarily ditch those too-close-for-comfort “real/reel” associations between Crawford and Craig, and concentrate on Crawford’s rather frightening portrayal of a screwed-down-tight neurotic in this Freudian satire of 1950s matriarchal America. 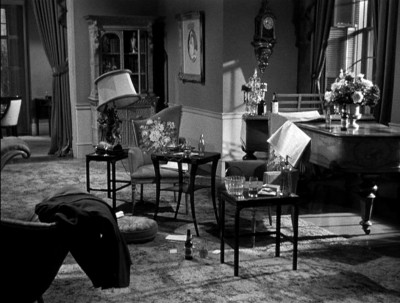 I’ve never read George Kelly’s 1925 play, Craig’s Wife, nor do I remember seeing the 1936 movie version of it starring Rosalind Russell (there was also a 1928 silent version starring Irene Rich). According to a few sources I’ve read, Kelly’s plays were noted for their moralistic attacks on his leading characters, characters who lacked ethical integrity and virtuous rectitude. This movie version of Craig’s Wife certainly doesn’t spare the lead character her comeuppance. However, it is notable that screenwriters Anne Froelick (The Master Race, Easy Come, Easy Go) and James Gunn (Affair in Trinidad, The Young Philadelphians), with an assist by director Sherman, take pains to emphasize Harriet’s reprehensible actions occur as a result of a psychological disorder, rather than Kelly’s more generalized “lack of character,” a thematic underpinning which was entirely in keeping with Hollywood’s decades-long obsession with Freudian psychology. 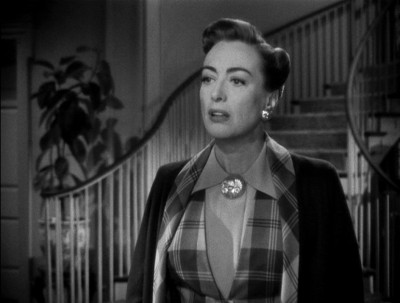 When Harriet visits her zoned-out mother in that plush sanitarium and offers her an expensive (and completely useless) bauble, and her mother, pulling out her sewing bag, responds by saying she has “too much mending” to do, you pretty much get an inkling as to where they’re going with this angle. When Harriet speaks to the doctor and bristles when asked if she is happy in her own marriage, Harriet’s formal, stiff response that equals, “Everything’s fine here—move along,” gets a knowing, blank reaction from the doctor (leaving the sanitarium, Harriet’s stated dislike of trains, hurtling her uncontrollably into the darkness, pretty much seals the deal for us as far as what’s going on with Harriet). 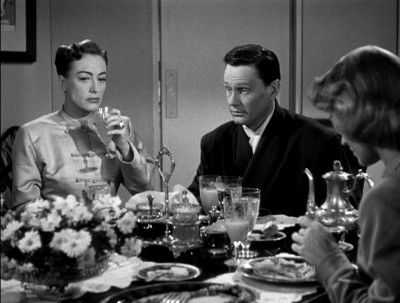 As the movie progresses, Harriet goes from bitch harpy to truly amoral destroyer, but her father’s betrayal at an early age at least gives the audience an explanation—not an excuse—for the behavior pattern she relentlessly employs. At the finale, we’re given the chance to feel, if not “forgiveness,” then “pity” for Harriet’s terrible acts of betrayal, when Crawford, quite brilliantly, somehow elicits from us sympathy for a truly unsympathetic creature in so much obvious psychological anguish.

spoilers After Harriet has driven away both Clare and Walter with her lies and manipulations, she is alone in her house, suffering the realization of what her actions have wrought. Just when we’re prepared to say, “Well, at least she understands the severity of what she’s done,” and thereby allowing us to give her just the tiniest of sympathetic leeway (while satisfying our own judgmental scrutiny), kindly next-door-neighbor and widow, Mrs. Frazier (Fiona O’Shiel) rings the doorbell. 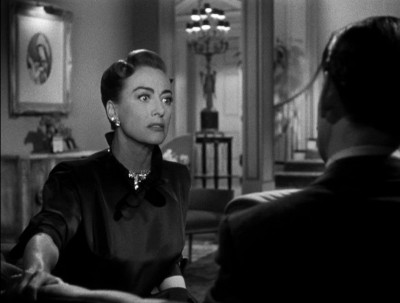 Aware of Harriet’s fight with Walter, she sincerely offers the simplest of creature comforts to a fellow human being in distress: company. Harriet, suspicious and jealous of Mrs. Frazier, as usual, and offended at her familiarity, immediately fortifies her wall, lies about the situation with Walter, and shuts the door in Mrs. Frazier’s face. Harriet is utterly alone in the large, empty house. She is damaged beyond repair, and no amount of sympathy from anyone—including us—no matter the so-called “excusable” psychological catalyst that took root in her, is going to change her thoroughly despicable behavior (if Harriet Craig was remade in today’s victim-as-hero culture, everyone but her would be to blame for her actions, no doubt…). 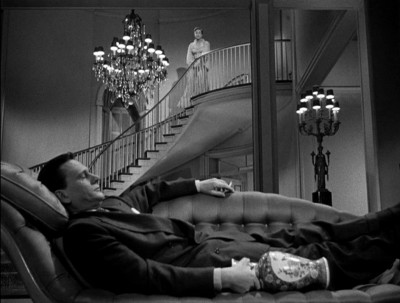 Harriet Craig‘s haunted house atmosphere of psychological horror (just check out master cinematographer Joseph Walker’s dramatically ghoulish lighting on Crawford) is frequently leavened by its satirical assault on the encroaching matriarchal tyranny of the 1950s American household—a “lightened” mood that is amusing in a thoroughly depressing fashion, when you consider how far the other way we’ve gone in feminizing the American male in the subsequent almost-70 years.

Vying, in American suburban popular culture, with the myth of “a man’s home is his castle,” was the phenomenon of “wife/mother knows best,” where the super-efficient, preternaturally-wise wife and mother ruled over her unruly brood and drooling simpleton of a husband with a velvet-gloved iron fist (one of Mad Magazine’s favorite subjects for ridicule in their 50s parodies, along with countless other serious authors, commentators and moviemakers at that time). Crawford’s “wife/mother knows best” of Harriet Craig isn’t so much a perversion of that myth ideal, but rather a natural progression of it to the nth degree: an uber-materfamilias who’s suffocating in her complete, loveless control of her home and husband.

Instead of one of those loving partnerships found on so many 50s sitcoms like The Donna Reed Show, Leave it to Beaver, or Father Knows Best (yes, they were partnerships, despite what new critics—who have never seen these shows—attest), Harriet’s marriage is a cold, business “arrangement,” in her words, where men are to be rigorously “trained” without their knowledge, until they’ve been neutered of all unwanted independence. Sound ridiculously over the top? Check out any episode of Everybody Loves Raymond, one of the most successful—and nauseating, if you’re male—sitcoms of the last thirty years, and see a grotesque picture of modern husbandry in American pop culture not too dissimilar from Harriet Craig (Ray Romano literally cowers, cowers, in fear of his shrewish, controlling wife and mother…to huge studio-sweetened laughs). Unlike those sitcom mothers who had their hands full with rambunctious little rug rats messing up their houses and diverting attention away from taking care of hubby, Harriet has perfected a ruthless, unethical solution: lie to her husband, telling him her doctor said she can’t have children. The result: no kids, no mess, and her husband all to herself.

Taking the teasing sexuality of those ultra-clean sitcoms to the last level, Harriet openly uses the promise of her sex act to control her husband…but she clearly doesn’t want it for its own sake, when he suggests it (Wendell Corey’s slightly dopey, emasculated, Dagwood Bumstead-ish husband plays perfectly against Crawford’s masculine steel…until his eyes go cold and dead at the end, when he reasserts his long-lost “don’t-give-a-sh*t-about-your-perfect-house” manhood against Crawford’s increasing feminine hysteria and instability).

Harriet’s even graduated up from a housewife’s daily drudgery—she gets the maids and her secretary/cousin to do all for her (it’s hilarious to hear Harriet always moan about what a rough time she’s having running her life). And her level of expected perfectionism for those servants is to the millimeter: blinds are to be closed no later than 11:30am; Ming vase is to be at least two inches from the edge of the mantelpiece; and husband’s whereabouts are to be accounted for to the second. You can take this last element as a criticism of materialism run amok, as many do when discussing Harriet Craig, but that’s only because it’s an easier, politically correct so-called “sin” to condemn.

Writers comment on Harriet’s attachment to her house as if the luxury is the final goal to her, but it isn’t: she clearly isn’t “happy” when she’s left with it, and nothing more. Rather, it’s all about control: control over the house, over the servants, over her husband, over the daily rituals of life, so she won’t ever feel out of control, or at the mercy of willy-nilly fate. Her willingness to lie about anything to maintain her facade of control is what eventually catches her up, when all her stories are finally compared. However, the rot was already there; she was doomed to fail in her domination no matter how initially successful. The 50s “wife/mother knows best” myth is transformed into a totalitarian sick joke in Harriet Craig…a transformed myth that you can still see in today’s American pop culture.