Just when you thought it was safe to visit a glamorous island, the crew at Vinegar Syndrome strikes again, giving us pause to tell us that it’s not safe to go…well, anywhere! This time, unfortunate lovebirds move to a lush Filipino island in director Herb Freed’s Beyond Evil, newly released in a Blu-ray/DVD combo pack by Vinegar Syndrome, and starring the great John Saxon (tan and muscular at 45), Lynda Day George (gorgeous at 35), Michael Dante, Mario Milano, Janice Lynde, Zitto Kazann, Anne Marisse, and David Opatoshu. 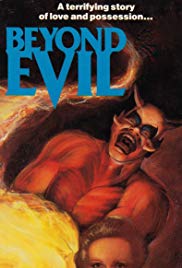 Let’s jump right into it: Architect Larry (John Saxon) and his new wife, hottie Barbara (Lynda Day George), shoot off to an island off the Philippine coast where they hope to move into a new condo being constructed by Larry’s Lothario-ish business associate, Del (Michael Dante). But when they arrive, fast-talking Del tells them the residence isn’t ready yet and pays for their stay in a local hotel, peeving Barbara who thinks Del is taking advantage of his relationship with Larry.

Later at dinner, Del reveals there was never a condominium…and instead he’s arranged for the couple to move into a gorgeous, historic mansion, the Casa Fortuna (Uh oh…), which is apparently haunted by the ghost of Alma Martín, the first lady of the home many centuries ago. Ya see, according to local legend, Alma became interested in the occult prior to she and her husband murdering each other…but hey, who cares about some ancient hokum? Barbara just wants to move into the damn mansion and get outta that hotel! 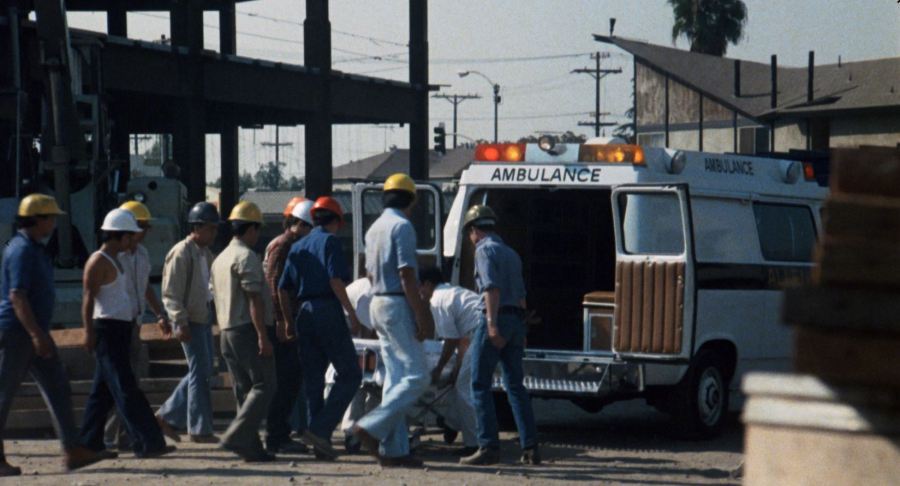 Once the couple moves in, Barbara starts feeling the effects, waking up in the middle of the night hearing ominous chants and seeing visions of a woman (whom she later learns is the image of Alma)…and begins doing strange things, like uncontrollably stabbing herself in the hand. The local physician, Dr. Albanos (Mario Milano), can’t figure out what the hell’s going on, so Larry visits their weirdo neighbors—Leia (Anne Marisse, then the wife of the film’s director, Herb Freed) and her father, Dr. Solomon (David Opatoshu), who practices the art of healing. Turns out, Dr. Solomon thinks Barbara’s spirit is in danger of becoming possessed! Stranger things continue to happen before Larry says screw it, let’s move!…but Barbara is having none of it. 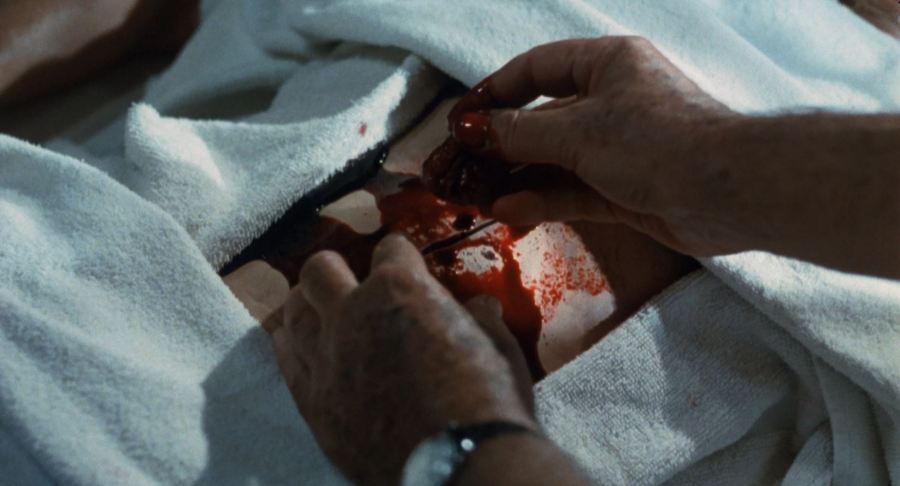 John Saxon, having just completed work on the 1979 Robert Redford/Jane Fonda Western, The Electric Horseman, is always fun to watch, and it’s no different here. Saxon is somewhat of an icon in these lower-budgeted, independent horror and sci-fi films (along with Beyond Evil, he prolifically appeared in Cannibal Apocalypse and Battle Beyond the Stars—all in 1980), and these days just seeing his name attached to one of these old-school exploiters is enough to sell discs and jolt the curious viewer to at least check it out. And Saxon here does a good job of playing the skeptical everyman—a typical, easygoing American trying to make life for his beautiful new wife the best he can make it. 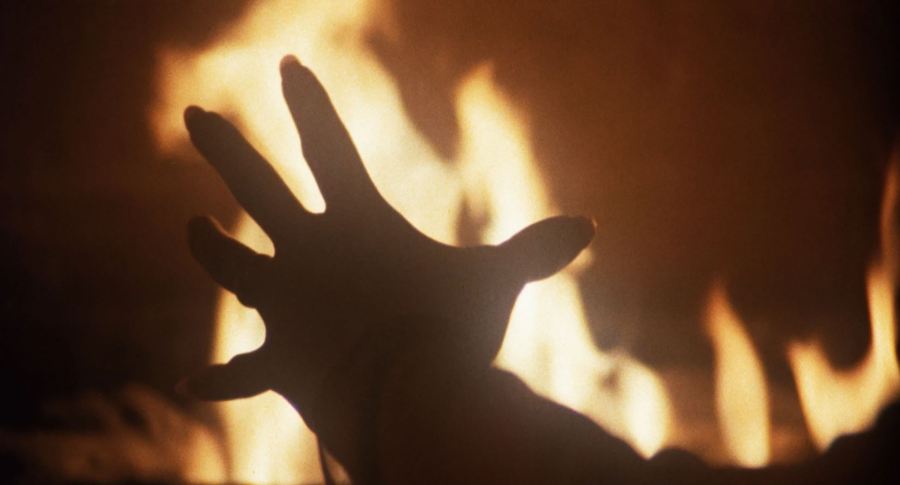 The other leads are good, too, adding a sense of believability among all the nonsense. Lynda Day George gobbles scenery as Barbara, who’s simultaneously sweet and stuck up; one moment she’s happy as pie with the free digs they’re about to inhabit and the next she’s complaining about being stuck in a (free!) hotel while they await modifications of their new home. 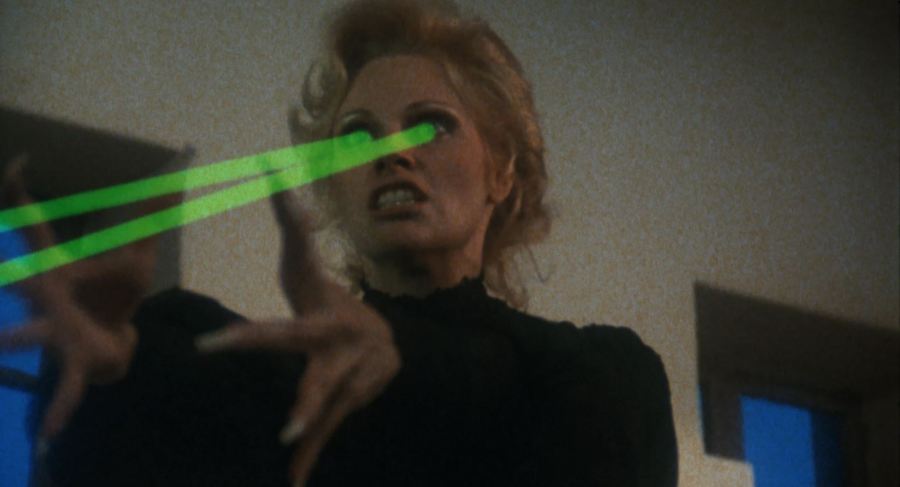 And what’s with that vague backstory concerning Barbara and Larry’s architect buddy, Del? It’s alluded to throughout the film that Barbara once had some sort of relationship with Del, but that it was in the past and no longer holds fire. I really wanted this fleshed out more and felt some key parts of that backstory were left on the cutting room floor. How serious were these two when they were together? How did the relationship end? Why is she now married to his best friend? And why is Del now buying his ex and her new husband (his best friend) a home through his company? There’s a really good nighttime soap opera in here somewhere that would’ve added some melodramatic fun to balance out the quirky horror elements and, perhaps, make things a little less “slow” overall. 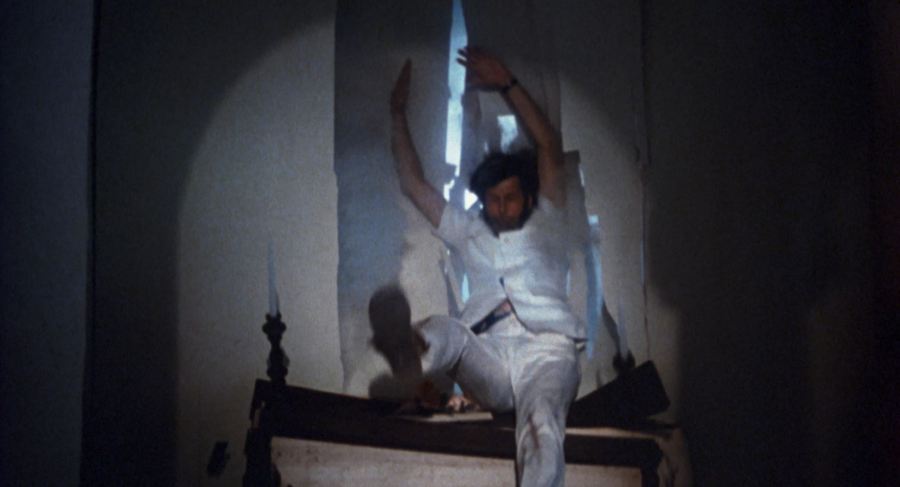 Produced by Entertainment Venture International (distributed by IFI/Scope III) and released in May of 1980, this movie is all over the place…but I dig the atmospherics. A brief look at online reviews and forum discussion reveals a lot of viewers found Beyond Evil to be a little slow, and I understand how they feel. The film spends a lot of time with characters contemplating their lives, feelings and surroundings…and while that lends to its so-called “talky-ness,” I found it a nice change of pace from the usual low-budget, balls-out, 80s exploitation horror outing that fans (especially today’s attention-deficit/smartphone-addicted viewers) clamor for when it comes to such films of the era.

Another frequent complaint I saw dealt with Beyond Evil‘s special effects. Those green-colored laser overlays used to illustrate the evil-from-beyond whenever Alma’s urge strikes to inhabit poor Barbara’s body. According to the film’s producer, David Baughn, MGM did the lab work on the title (Baughn had worked at MGM before his independent days), and the studio didn’t do a great job handling the material. Baughn, seeing contemporary films like Halloween and Friday the 13th and wanting a piece of that pie, said that he and others involved were disappointed with Beyond Evil‘s special effects, especially compared to what the major studios were doing at the time. In his new interview on the Vinegar Syndrome disc, he tells the story of how MGM actually ruined an entire reel of film while doing the lab work, which resulted in a few re-shoots and some shoddy-looking scenes in the final product, ultimately causing HBO to pass on the film at the time (Baughn says it did make its money back, running it through a number of theaters, and CBS even aired it once during its late-night movies block in the ’80s).

In another new interview on the Vinegar Syndrome disc, director Herb Freed (Haunts, Graduation Day) comes across as contemplative, which makes sense considering he set out to be a rabbi before dropping out of training after three years and becoming a film director. That early aimlessness and contemplation comes across in Beyond Evil, and the film has an almost mythical swell to it, thanks in large part to the score by popular Italian musician Pino Donaggio, whom Freed speaks highly of throughout the interview.

The 2019 Vinegar Syndrome release features the film newly scanned and restored in 2K from 35mm vault elements. As always, the presentation is packed with special features. Included are the above-mentioned new interviews: Origins of Evil, the interview with director Herb Freed; and Evil in Paradise, the new interview with producer David Baughn. An original theatrical trailer and English SDH subtitles are also included, along with reversible cover artwork (the limited edition features a great-looking slipcover).

Ultimately a throwback to the contemplative gothic chillers I remember from the 60s, Beyond Evil won’t appeal to everyone, especially those needing the constant dopamine drip of quick cuts and MTV-like pacing…but as an early 80s curiosity, I’m thrilled to have an obscure film like Beyond Evil sitting on my shelf in high-definition.