Pulse is slick, suspenseful techno-horror, with some interesting undercurrents.

Still rummaging around in my box of goodies after my visit from the members of Movies & Drinks “Welcome Wagon” (the baked bean casserole was lovely, but the “key party” invitation was an overreach), I dug up an unknown treat: Mill Creek Entertainment’s bare-bones Blu-ray of Pulse, the 1988 supernatural sci-fi/suburban horror thriller from indie Aspen Film Society (released by Columbia Pictures), written and directed by Paul Golding, and starring Cliff De Young, Roxanne Hart, Charles Tyner, and Joey Lawrence. Taking the deceptively simple premise of electricity itself becoming somehow malevolent and murderous, Pulse backs up its credible suspense and well-staged action sequences with two interesting subtexts: a little kid’s anxiety and unhappiness at being shuttled back and forth between divorced parents, and everyone’s fear of technology rapidly dominating—and maybe extinguishing—an increasingly uncomprehending mankind (even more relevant today).

A heat storm moves into an area of Southern California and specifically over a massive electrical power station. A lightning strike transfers a malevolent current of electricity that then travels to a transformer in workaholic Bill Rochland’s (Cliff De Young) upper middle-class suburb. There, it enters a home across the street from Bill and takes possession of it, proceeding to drive the inhabitants crazy, first killing the wife by having the garbage disposal fling a metal bolt through her head, and then flooding the house, electrocuting the grief-stricken husband.

Enter little David Rochland (Joey Lawrence), Bill’s 11-yr-old son, who lives with his mother in Colorado. Bill has visiting David for the summer, and David doesn’t like it, even if Bill’s new wife, Ellen (Roxanne Hart), is sweet and kind and loving towards David. Hardworking Bill doesn’t have much time for David, which leaves David plenty of time to wander around his father’s cold, lifeless house, wondering why he keeps hearing things in the walls and in the appliances. David’s secret trip over to the boarded-up neighbor’s home finds him frightened by contractor Old Man Holger (Charles Tyner), who tells David that there’s something evil in the electricity. Bill and Ellen chalk up David’s increasing paranoia to his unhappiness due to the divorce, but after several inexplicable accidents in the home, Ellen starts to think that maybe David is right, a growing, frightening belief confirmed by Holger: the electricity in the Rochland house is turning the house against the Rochlands.

While I’d never call myself an “expert” in 1980s horror, I thought I went to or rented about every horror and sci-fi movie released back then. Apparently not. Pulse didn’t register the slightest ping on my radar when I looked at that original poster art on Mill Creek’s disc case, so I was going in clean with this movie, without any preconceived notions. Trying to find actual production or release information on Pulse proved difficult; about the only thing that came up was Box Office Mojo saying it opened on March 10th,1988 (a Wednesday), and that it made a total of $40,000 and some change. No screen info, nothing (if that number is actually correct, I can’t believe the movie was widely released—perhaps one or two screens as a contractual obligation or trial run, before Columbia dumped it). According to some reviews I read, Pulse often played on HBO, so maybe that’s where its small recognition among hard-core 80s horror fans comes from today. 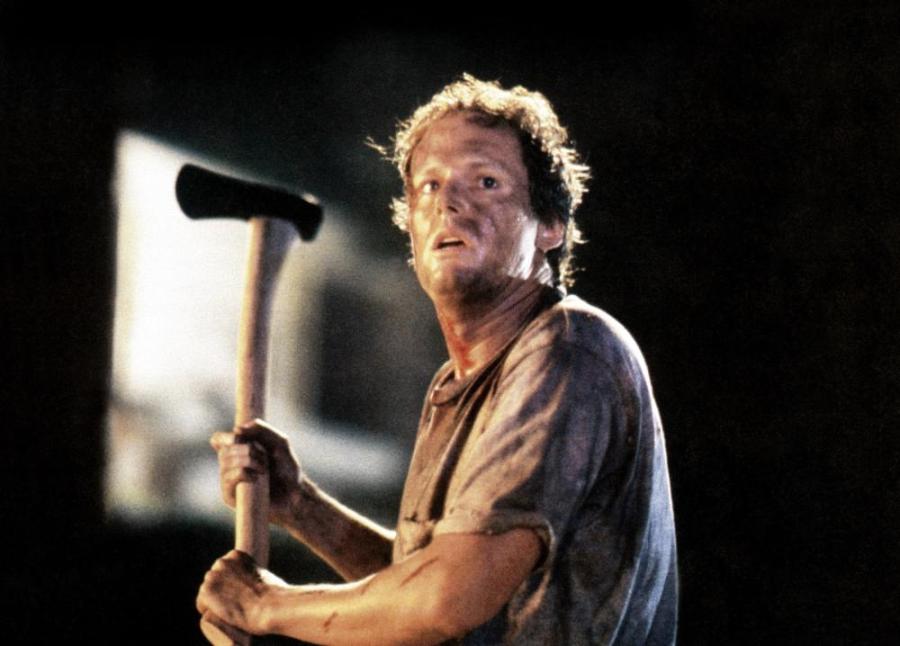 Many of those reviews also seem to strike the same note when it comes to Pulse’s central “electricity is evil” premise: that it’s dumb, and doubly dumb because it’s not explained. Huh? Since when does any horror premise have to be logically explained? You think Jason and Freddy and Dracula are “logically” explained? It’s all fantasy, for chrissakes. If you cotton to the notion that electricity in a house could suddenly begin to work against its inhabitants instead of for them, isn’t that enough as long as the movie pulls you in and frightens you? Do you really need to know why the pulse exists, or where it came from?

Besides, I’m betting writer/director Paul Golding didn’t care, either—he seems more interested in using that “pulse” as a metaphor for other ideas within his effective, solidly-built suspenser. If you ditched the supernatural aspects of the story and blurred the reality of whether or not the electrical attacks were actually happening (instead of in David’s mind), Pulse could just have easily been a straight psychological thriller. Golding (a contemporary of George Lucas who seems to have disappeared from the movie scene; Pulse regrettably was his last credit on a meager resume) is adept at creating a believably tense, anxious environment for young David. The first image we get of the boy is him traveling alone on an airplane, clutching a plastic toy horse in fear. His summer vacation home is basically a prison, barred at every window and door, and the neighborhood kids his age aren’t friendly. Dad smokes when his real mom quit (Bill and Ellen crack a window and laugh at the boy’s coughing), and he can’t even get a meal he likes (too many mushrooms in whatever it is Ellen made for him, so instead he gets…soup. Yummy).

David simply does not want to face that his world has permanently changed for the worse; his parents are never going to live together again with him in Colorado. That dread is made more palpable by no due cause: David’s father and stepmother are portrayed as basically nice, loving parents. Bill may be a workaholic (no doubt he has alimony and child support to cover, along with that nice house and Corvette), but he clearly agonizes over spending time with David, and tries to remedy it, while Ellen is shown as supportive and loving towards David without fail (no evil stepmom here). Ultimately, none of that matters to David (Golding gives us a telling overhead shot of David, alone in his “new” empty bedroom his first night, encased in a tight, childish race car bed, staring miserably up at the ceiling). David wants things the way they used to be, and the increasing frustration and anger he feels (he keeps calling his real mom, begging to come home) is reflected in the growing negatively charged energy that is coursing through the house. 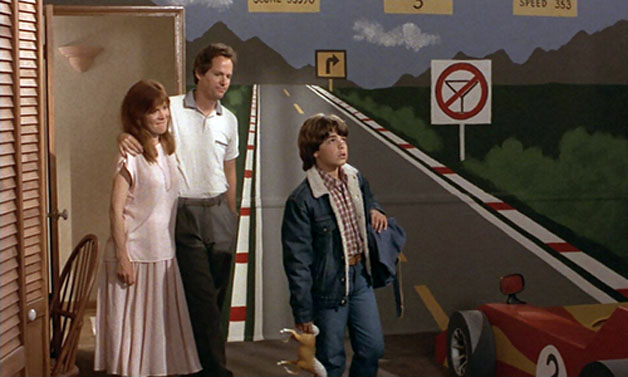 Even better, writer/director Golding wants us to question and outright fear all that technology that is piling up around us. Granted, Pulse’s 1988 time frame limits us to evil TVs, clothes dryers, and circular saws, but what Golding is getting at here is more than a little pertinent today (just ask all those Whole Foods employees who are going to get pink-slipped by Amazon Hal 9000 ServiceFood bots in the coming months…). The opening title credit sequence is a beautifully sinister montage of illuminated streets, generating plants and power lines, leading to Bill’s neighbor’s house (helped enormously by composer Jay Ferguson’s—A Nightmare on Elm Street 5: The Dream Child—menacing electronic score). Inside, Bill’s unseen widower neighbor freaks out, trying to destroy his house as it destroys him, before he’s electrocuted/impaled by an unwound conduit line. Technology doesn’t serve man in Pulse, it serves him up.

Little David distrusts technology from the start, looking with dismay at the motorized bars that cover his dad’s picture window (a pleased Ellen smiles at them), before telling Ellen that her microwave oven could make her sterile (Ellen quickly says that’s not true). Before Golding gets down to the house’s electrical appliances actively seeking to kill the family, he shows a number of fascinating macro close-up images of the appliances’ wires and circuits melting from the pulse, the solder points bubbling and merging like organic organisms—or diseases—that will prove deadly to the Rochland family (these remarkable images reminded me a lot of those close up microscope shots of the “Andromeda strain” in the same-named sci-fi classic).

In a scene that many reviewers found pointless—Robert Romanus’ glib, helpless TV repairman—Golding gives us a clear foreshadowing of what’s reality for most of us today. The movie’s “expert” on technology, Paul, doesn’t have a clue as to what’s going on with the Rochland’s fried TV; there are so many incomprehensible circuits in TVs today, he confesses, he just blindly follows the manual for a monkee see/monkee do repair job. Pulse’s other expert—contractor Holger, who has ditched all his electrical devices in his own home—knows on some kind of mystical, spiritual level that something’s wrong with the power supply, but he’s done trying to warn people about it; they just call him crazy. If these two experts can’t understand or combat this technological evil…what chance do we have?

Sociology aside, Pulse is better-than-expected at ratcheting up the suspense. Looking more lush than its budget would indicate (one source indicated it cost around the $5 to $6 million mark), cinematographer Peter Lyons Collister (Halloween 4: The Return of Michael Meyers) creates a gloomy, claustrophobic, intimidating suburban environment of cold blues and greens and muddy browns, while editor Gib Jaffe (They Live) keeps the cutting drumbeat-steady, tightening the screws of suspense until the house begins its final frenzied attack on the Rochlands. 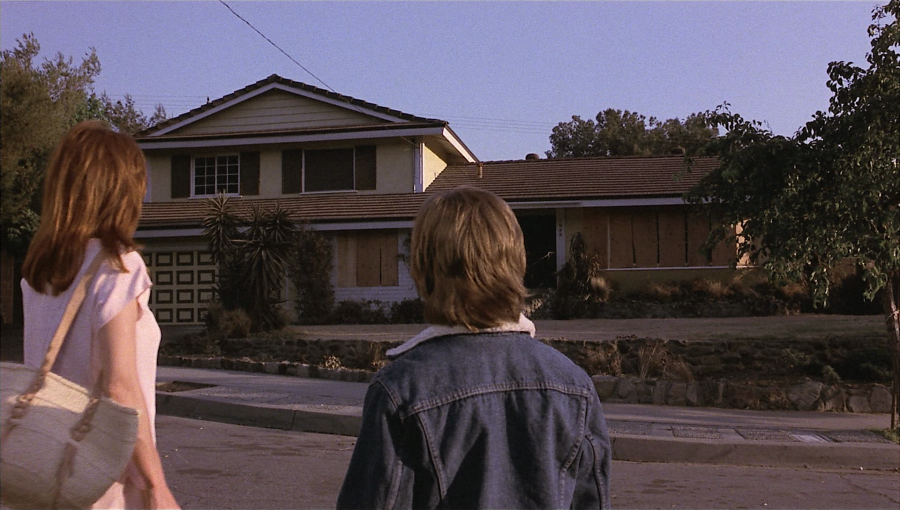 Performances are entirely adequate for what’s called for here. Cliff De Young isn’t a lead actor for a reason, but he’s okay as the passive father (Tommy Lee Jones, who reportedly read for the part, would have been a better choice), while Roxanne Hart impresses when her sweet character eventually breaks down with Charles Tyner (do I need to say that old pro effortlessly nails his creepy character? He walks away with the acting honors here). Joey Lawrence is on screen during most of the movie, and all he has to do is come off like a normal, believable kid slowly realizing he’s in an impossible, life-threatening situation…which he does quite well.

Director Golding knows how to stage a set piece (the gas pipe leak in the garage, the scary shower stall scalding of Hart), with the final house assault coming off as enjoyably tense and satisfying (that bolt-throwing circular saw was a nice touch, and the almost-electrocution scene in the laundry room was particularly well designed visually, all playing out while anonymous neighbors watch and hear the screams of David…before turning off their lights and turning away). Fans of 80s gore horror will be disappointed by this PG-13 outing, but readers looking for a suspenseful sci-fi/horror shocker with something on its mind will plug right into Pulse.

One thought on “‘Pulse’ (1988): A pre-Internet warning about technology”