The grade Z drive-in double feature no one has been asking for!

Shout! Factory’s Scream Factory line has released, on Blu-ray, Millennium and R.O.T.O.R. on a single disc double feature. 1989’s sci-fi time traveling/airplane disaster mash-up Millennium, from David “Here…let me endorse that check for ya!” Begelman’s Gladden Entertainment (released by 20th Century-Fox), was directed by Michael Anderson and stars Kris Kristofferson and Cheryl Ladd. 1988’s R.O.T.O.R., from Manson International and WestWind Pictures, was written and directed by a guy who did some innocuous TV cartoons, and it stars some people. There are certainly fans of marginal 1980s exploitation misfires out there (myself included), but one will have to try hard here to find the dross amid all the, um…dross. We’ll split the review in two to make these movies seem far more important than they are, shall we?

Dallas, Texas, 1989. Society is rapidly spiraling down into chaos, and the only person that can save it is Dr. Captain Coldyron (zero credits Richard Gesswein, who was dubbed in post by Loren Bivens). A robotics specialist, Dr. Coldyron convinced the Dallas Police Department ten years before to fund an experimental unit—Robotic Officer Tactical Operation Research—that would deliver a crime-fighting mechanical officer capable of cleaning up the cesspool that will be America’s future. Unfortunately, Coldyron’s superior, Division Commander Buglar (Michael Hunter, Robocop, Big Bad John) is getting heat from Senator Douglas, who’s worried that all the misappropriated R.O.T.O.R. funds they all stole could become public.

So…Dr. Coldyron has 60 days to produce a tin man, or he’s fired and very probably brought up on fraud charges, as well. Coldyron, telling Buglar R.O.T.O.R. needs at least 25 years to develop, resigns. Unfortunately, an accident in the lab (a…shorted out Sony Walkman) causes R.O.T.O.R. to come online, and this metal exoskeleton police officer thinks nothing of blowing away a speeder as part of his prime directive: “To Judge and Execute.” So now it’s up to Coldyron and…Dr. Steele (credited as Jayne Smith…but dollars to donuts it’s a dude) to track down R.O.T.O.R. and stop him from killing pretty Sony (Margaret Trigg). 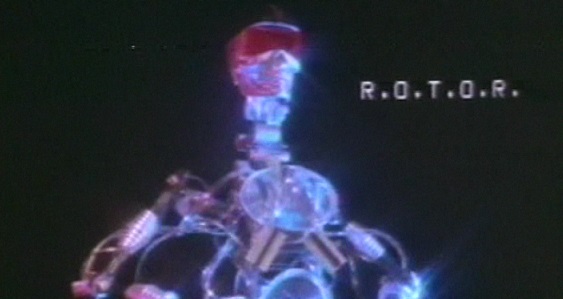 I’m sorry…but I like my robocops clean shaven. A micro-budgeted rip-off of Robocop and The Terminator, R.O.T.O.R. is jaw-droppingly inept in almost all departments (only cinematographer Glen Roland, of Ilsa: She Wolf of the SS infamy, comes off okay with one or two nice sunsets). Directed and co-written by Cullen Blaine (tons of animated TV series like Super Friends and The 13 Ghosts of Scooby-Doo) with scripter Budd Lewis (TV animation like The Smurfs and The Care Bears Family), what’s so surprising about R.O.T.O.R. is how none of it seems even remotely as well put together as all the marginal cartoon crap these two guys worked on over the decades (for instance: they couldn’t have employed some of their storyboarding experience to at least give this knock-off some flow?).

Completely derivative (they even stole the poster one-sheet artwork from Mad Max) and yet idiotically wrong-headed—if you’re stealing ideas…can’t you steal them correctly?—R.O.T.O.R. takes forever to get going, throwing out some liberal fascist ideas about “protecting society from itself” (“Either we control society, or it destroys us,”), in between these weird, long vanity montages of Gesswein getting up in the morning and making his coffee, or having lunch with his girlfriend.

We get some chewing gum and bailing wire stop-motion approximations of R.O.T.O.R.’s exoskeleton, animation that makes early Gumby and Pokey look like Pixar, while hearing a frankly crazy exposition/lecture about its metal’s molecules learning how to walk without gears (“How does the chassis animate without gears and motors?” someone asks, to which Coldyron nonsensically replies, “This chassis has been given a prime directive.” Huh!?). 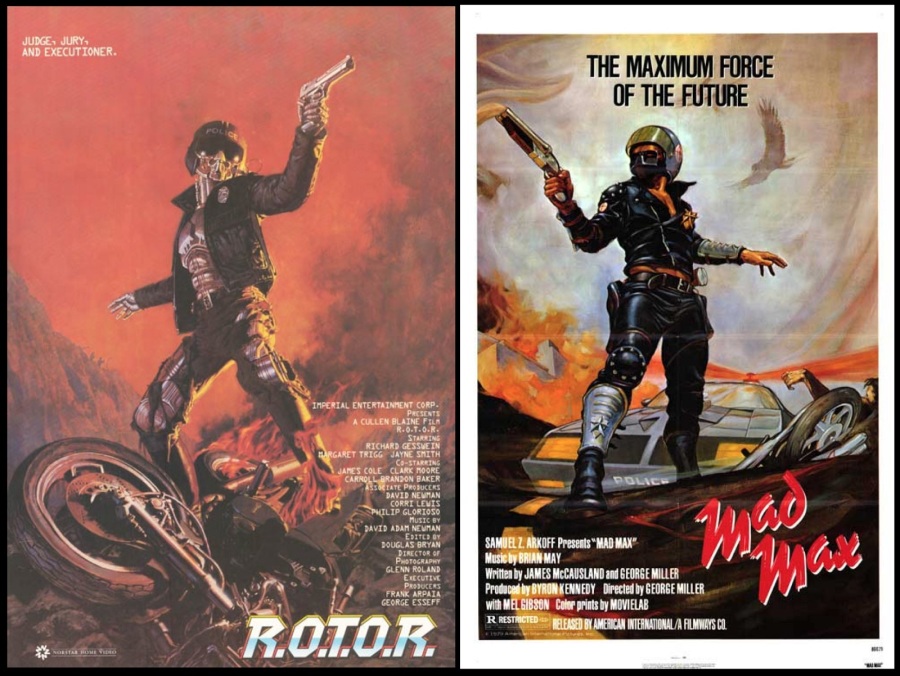 And then the action, if you can call it that, kicks in. How R.O.T.O.R. is finally activated isn’t worth discussing…although why they initially can’t make R.O.T.O.R. work is curious when Coldyron apparently has the artificial intelligence skills to create Willard (or is it W.I.L.L.A.R.D.?), a fully cognitive, sentient computer who traipses around the lab making wisecracks not even worthy of The Jetsons‘ Rosie the Robot (“One of these days I’m going to quit this job.” Oh god the pain from laughing…). 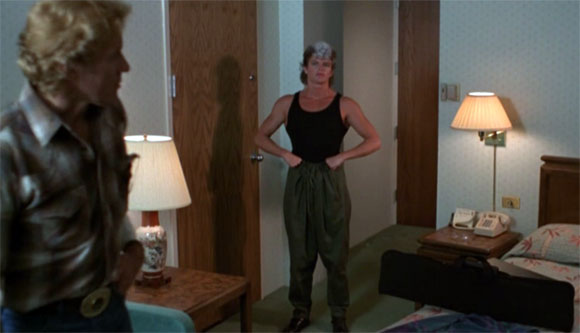 The entire last half of the movie, as R.O.T.O.R. engages in an excruciatingly slow “chase” of fleeing Trigg, is flat-out dire (my favorite idiocy is his heretofore unused, uncalled-for motorcycle—stenciled with “To Judge and Execute” on the side for god’s sake—roped off in the police station parking garage like it’s an exhibit at a casino…just waiting for him in 25 years). Coldyron calls Dr. Steele, the creator of R.O.T.O.R.’s exoskeleton, for help, and the two ride around engaging in dialogue exchanges that rival the best of Abbott & Costello. When Steele offers this Zen advice on how to beat R.O.T.O.R.—“To combat pure will you’ll have to use purer logic. You will have to let yourself fail. Use your failure against him. Your failure is his failure. Your weakness is his weakness. Then, and only then, can you do something,” Coldyron knocks it out of the park with a simple, “Great…except I don’t know what any of that means.” (It’s moments like that that almost save R.O.T.O.R.).

The action scenes were apparently blocked and choreographed by Mr. Magoo (the fake punches are a mile off), while the pacing, if possible, is even slower than the movie’s talky first half. Lame Dirty Harry shoot-outs and silly Every Which Way But Loose diner fights vie with giggle-inducing close-ups of R.O.T.O.R., pot-bellied, fat-faced and mustachioed, supposedly evoking terror in Trigg, before Blaine stages the ludicrous finale (when they put out that tiny little rope snare to catch him, before he’s lassoed from about eight different impossible angles with primer cord, this reviewer hit the floor dying). Thrill-less, amateurish, and mostly downright stupid, R.O.T.O.R. is W.O.E.F.U.L.

R.O.T.O.R.‘s MPEG-4 AVC Video 1080p HD 1.85:1 Blu-ray transfer is quite nice, considering the obscurity of the title. The original source material is relatively free of damage (interestingly, the print used here has a “Blue Steel” title card, before the original credits resume). Fine image detail isn’t deep, but more than acceptable in closer shots. Grain structure falls apart a bit in the nighttime scenes, while color is generally solid with a mostly bright image. The English DTS-HD Master Audio stereo track is clean, with little if any hiss, and (unfortunately) discernible dialogue. Optional English subtitles are included. An original trailer is the only extra here. 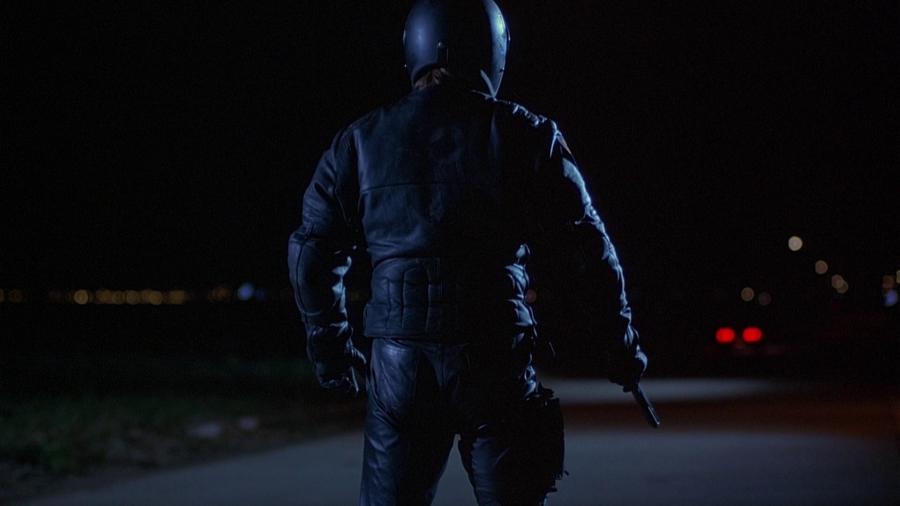 Need your Friday the 13th fix? Check out 13 FANBOY, a 2021 indie slasher just in time for Halloween from @deskpopentertainment, released on DVD by @millcreekent. Find my #YouTube review link in my bio. Written review at MoviesandDrinks.com
KNIGHT RIDER turns 40! On this day in 1982, Knight Rider premiered on NBC. In my latest video, a look at KR physical media, books & other items, along with some personal memories of my favorite childhood show! (Link to channel in bio)
Some new pick-ups from @vinegarsyndrome sharing space with my popcorn maker. Unboxing vid linked in bio.
Cash money for an Amazon return?? In my latest video, a few of my favorite stories from when my online orders of physical media went off the rails. (Link in bio.)
NEW YORK NINJA was released in 2021, but looks an awful lot like 1984. Great production by @vinegarsyndrome, with soundtrack by @voyag3rband. My YouTube review linked in description (& my written review can be found at moviesanddrinks.com
Today's arrival from @shoutfactory: the 1978 TV film, DR. STRANGE.
Fun in the sun with MAGNUM PI: THE COMPLETE SERIES on Blu-ray! Happy to see @millcreekent keeping the physical media flame burning for vintage TV. Link to unboxing in bio.
A little unboxing of a sealed 1983 Galaxian cartridge for the Atari 2600. I purchased it 15-20 years ago on Ebay. Link to video in description.
Took in a little artificial revenge with STEEL AND LACE (1991), video store-era fun released on Blu-ray by @vinegarsyndrome.
I legit chuckled my way thru 1989's THE LAUGHING DEAD - as it should be! Another nice Blu-ray restoration from @vinegarsyndrome. I talk about it in my video (link in bio).
A lil Chuck Norris in my most recent video (link in bio). BREAKER! BREAKER! (1977) is a fun ride through the rural, truck-drivin', CB-talkin' late 70s!
Watched THE SLAYER (1982) & enjoyed the ambiguous ghost story vibes mixed w/slashery feels. Released by @arrowvideo. Link in bio to my video review.
Loading Comments...
%d bloggers like this: